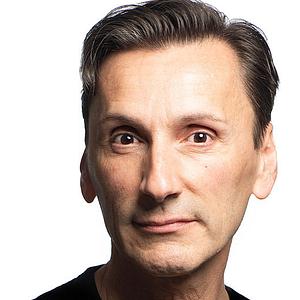 Luciano Aimar was born in Italy and began studying ballet at the Teatro Nuovo in Turin. He then traveled to Paris, where he studied at both the Peter Goss Dance School and Carolyn Carson Dance School. He returned to Turin to dance with the Teatro Nuovo as part of the corps de ballet.

In 1985, he entered the Ballet Theatre l’Ensemble in Brussels, directed by Micha van Hoecke, with whom he danced original roles as both a soloist and principal. He received his master’s degree in dance therapy at the Centro Regionale per la Danza Terapia, Maria Fux in Florence, Italy.

From 1992 to 1996, Aimar was a developer and instructor of dance therapy programs, working with individuals with Down’s syndrome, mental illness, and blindness. He also developed a special program for women living in prisons, as well as a group for women cancer survivors. In addition to his work in special education, Aimar taught ballet at the Centro Studi Danza e Movimento in Florence, Italy.

He moved to the United States where he worked as volunteer at the Perkins School for Blind in Watertown, Massachusetts as a dance therapy instructor. After his volunteer work, he moved to the Creative Movement and Arts Center in Needham, Massachusetts as teacher and program director, where he successfully developed programs for children ages three months to seven years.

Aimar’s passion for understanding the process of learning helped him develop a strong technique and approach to teaching young children. He joined Boston Ballet School in 2005. He wrote the APBT- American Preparatory Ballet Training©, in which he integrated his knowledge of ballet with his long experience in early childhood education. He was named the Head of Children’s Curriculum in 2012 and is responsible for training the program’s faculty.

In 2018, the School of American Ballet in NYC asked to adopt his APBT, and train their faculty, for their new Little Dancers program for students ages 4-5. In 2022, Philadelphia’s Rock School for Dance Education asked Luciano to do the same.

In addition to his work at the BBS he is currently also an adjunct professor at Dean College and dance advisor for the WGBH children’s show “Pinkalicious & Peterrific.”