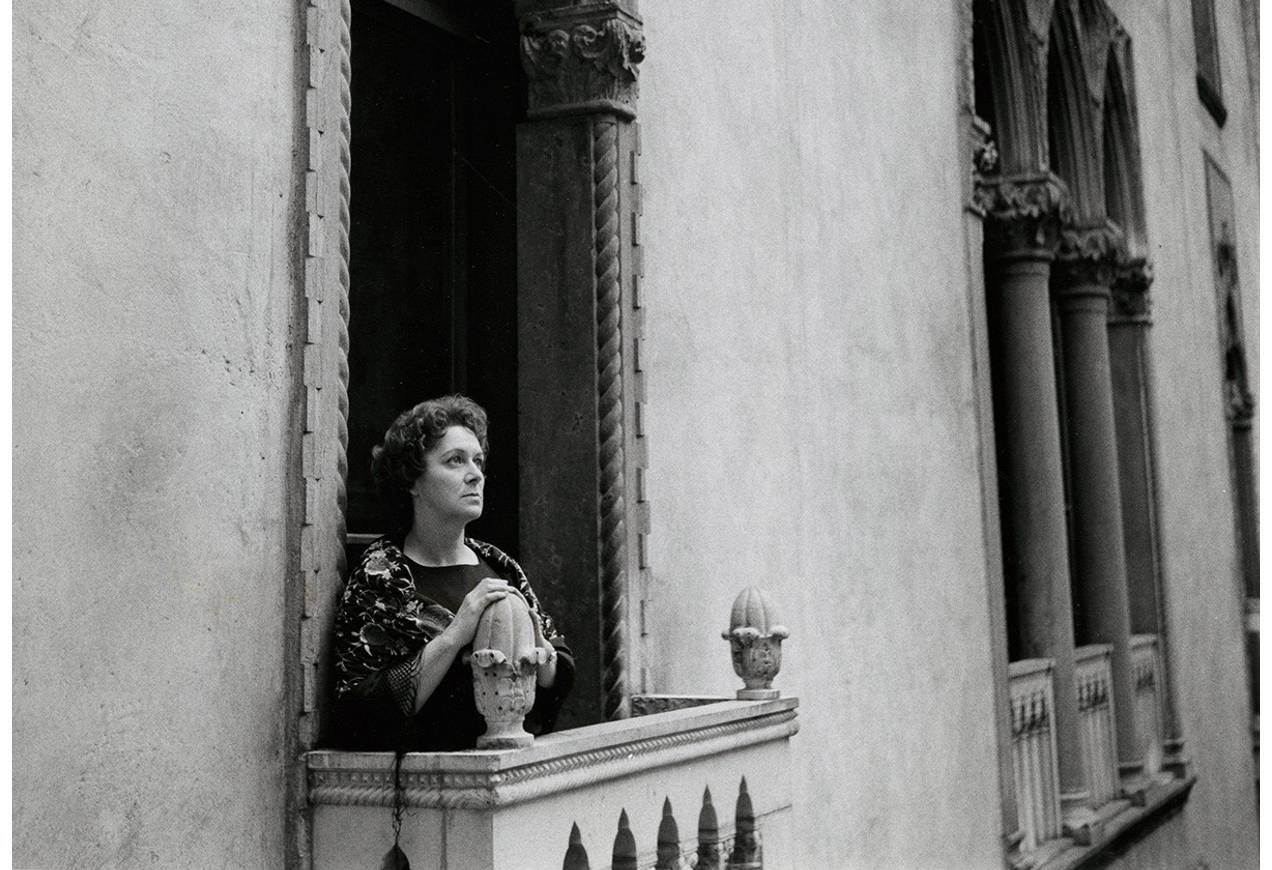 E. Virginia Williams founded Boston Ballet in 1963, making it the first professional ballet company in New England. Get to know the driven dreamer who started it all. 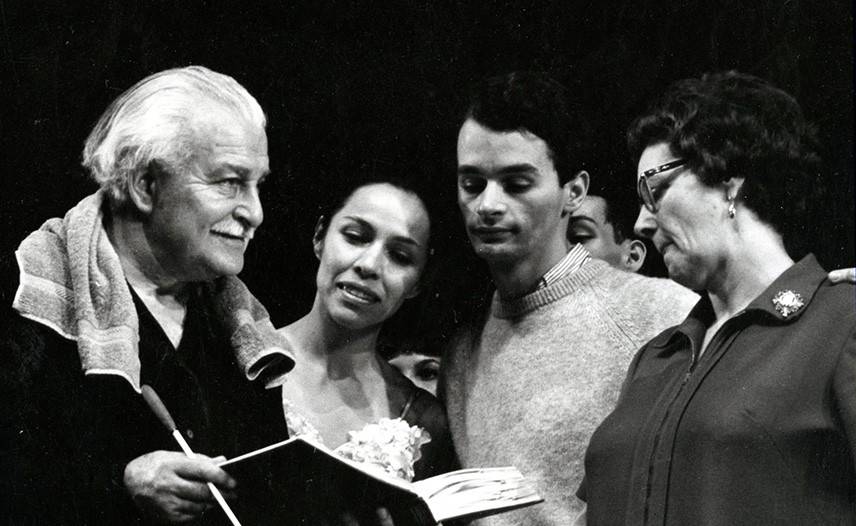 LOVE OF DANCE FROM THE BEGINNING

Ellen Virginia Williams was born in 1914 and grew up in Melrose, MA. Williams had a rich family history—her father was a descendent of Roger Williams, the founder of Rhode Island, her mother’s family came to Plymouth on the first boat after the Mayflower, and her grandfather sailed trade ships to China out of Salem, MA.

Virginia’s parents introduced her to the arts at a very young age. “Once a week, from the time I was two, they took me to the Thursday matinee at the B.F. Keith, in the old Boston theater district,” Williams said in a 1976 interview with Dance Magazine, explaining that this led to her love of dance. “I saw some very good Russian dancing there…When I saw Irene Castle in ‘The Skater’s Waltz’ she wore a beautiful white costume, trimmed in fur, with a white fur muff. I went back home and wrapped my hands up in a Turkish towel to make a muff like hers, and went sliding and gliding around the house. I was Irene Castle, and I was dancing. I was about four years old. From the earliest time I thought I was going to dance, and I never changed my mind.”

Soon after, Williams began taking ballet lessons. As a young performer, her talent for teaching already began to shine through. “When I was performing in concert groups, I was invariably telling the dancer beside me that he was on the wrong foot, or that she had the arms wrong. Or I’d be nagging the dancers to get the unison movement better aligned,” Williams said. “I always seemed to be more interested in what other dancers in a work were doing than I was in my own performance.”

Williams began formally teaching at age 16 when her instructor needed a substitute one day, and from then on she never stopped. As an adult, she went on to open dance studios throughout Massachusetts, including the Boston School of Ballet located in Back Bay.

CREATING A COMPANY FROM THE GROUND UP

In 1958, Williams founded the New England Civic Ballet, a pre-professional dance company that incorporated her students from the Boston School of Ballet. “She liked to say that the reason she formed a company was that she hated to see her students have to move elsewhere to find jobs,” wrote Mark Feeney for The Boston Globe in 2013.

At the same time, Williams was developing a collegial relationship with George Balanchine, co-founder and artistic director of New York City Ballet. Balanchine allowed her to observe his company’s rehearsals, study his teaching methods in class, and bring her students to learn from him at the School of American Ballet. Balanchine was invested in helping Williams and in 1963, thanks to his recommendation, the Ford Foundation selected New England Civic Ballet to receive a significant grant. This grant enabled the Company to become professional, and what is now Boston Ballet.

From the Company’s creation, Williams was in charge of almost every task, no matter how mundane. She would teach classes for Company members and school students and then clean the studios. She chose the repertoire and choreographers for the Company, as well as choreographing, casting the performances, and sewing the costumes. She would even take tickets at the theater.

“For the first 20 years or so records were kept in shoe boxes and costumes were taken home nightly to be sewn,” said former Artistic Director Bruce Marks. “There was little time, in those days, for anything but work, and one could see E. Virginia at the front of the studio, her hair up in curlers, eating Chinese food out of paper cartons, her chin jutting forward as she expounded on the beauty of the art form.”

Williams had a clear image of what she wanted from her dancers. “Dance should speak in vivid images, with strength, and at the same time, with beauty,” Williams said. “The greatest dancers are, indeed, actors and actresses. Musicality is important. Tenacity. Ambition. He or she must live to dance.”

The most exciting performers seem to have an extra, electric energy that galvanizes the audience. 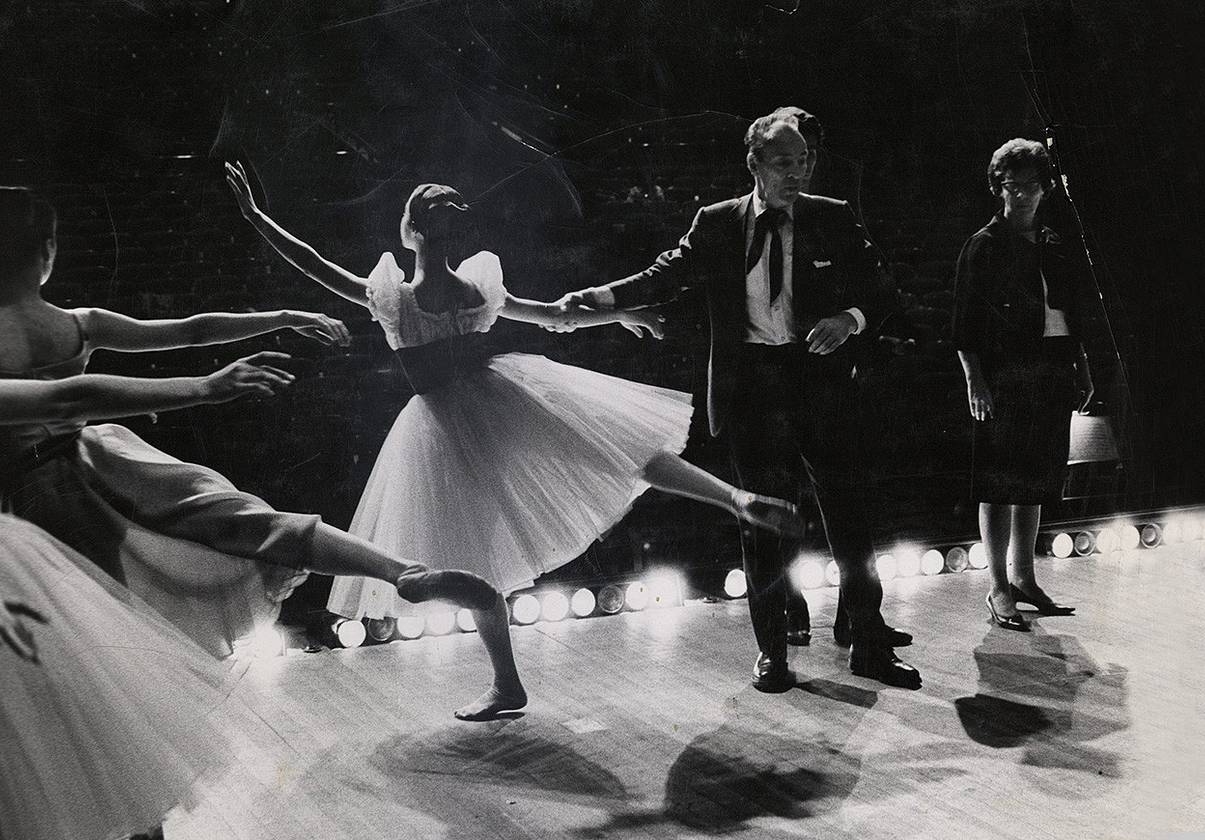 Williams was known to be witty and unwavering, but she also had a timid side. She was very introverted from a young age, and dancing allowed her to come out of her shell.

“It’s very difficult to explain the really terrible shyness I suffered from…But on the stage it was different,” Williams said. “You can really do whatever you want up there…The minute the music started playing and the stage lights came on, you were in your own world…You were free then to be beautiful and to be happy.”

Williams continued to find confidence as the leader of Boston Ballet. “While Virginia might have been shy in large gatherings, on home turf in the studio she was bold and outspoken. She said what she thought and usually got what she wanted,” said Bruce Marks.

BREAKING BARRIERS IN BOSTON AND BEYOND

Not just the first professional ballet company in New England, Boston Ballet had other important “firsts” around the world. In 1979, the Company opened the Nervi Arts Festival in Italy. In 1980, Boston Ballet made history as the first American dance company to tour in China as part of a five-country world tour, in which they sold out shows in Peking, Shanghai, and Canton before moving on to wow crowds in Hong Kong, Israel, Italy, and France. The Company also hosted several choreography competitions that brought choreographers from all around the world to Boston—encouraging and developing new talent.

In 1976, Williams won the Dance Magazine Award for her accomplishments at Boston Ballet. “She has a leader’s vision, drive, and enduring stamina. There’d be no Boston Ballet without that,” wrote Tobi Tobias for Dance Magazine in June 1976. “She’s also retained a sense of lyric fantasy—the dream of a world in which things happen beautifully and right—that most of us, as adults, abandon. Probably, there’d be no Boston Ballet without that either.”

“E. Virginia Williams was a visionary,” said Artistic Director Mikko Nissinen. “Boston Ballet would not exist without her, and I am proud to continue to build upon her legacy.”

E. Virginia Williams founded Boston Ballet in 1963, making it the first professional ballet company in New England. Get to know the driven dreamer who started it all. 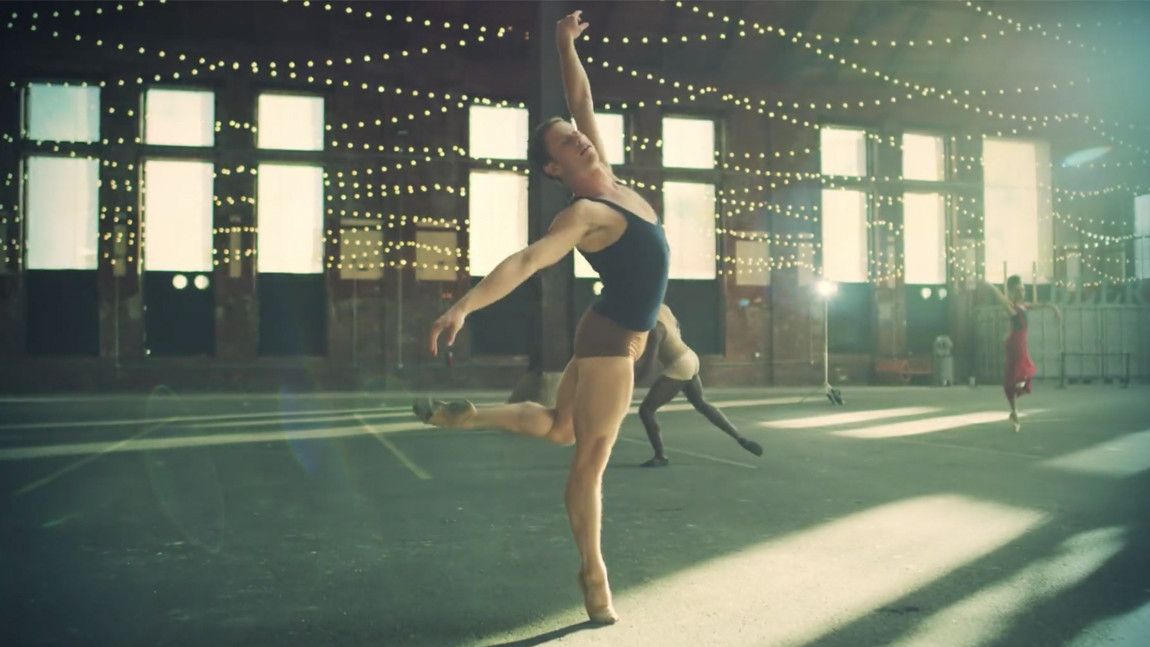 Spotlight: Move Beyond the Ordinary

Spotlight: Move Beyond the Ordinary

Get inspired to move beyond the ordinary and add an element of the unexpected to everyday life. Go behind the scenes for an exclusive look at the vision behind the 2019-2020 season, brought to brilliant life in collaboration with award-winning costume designer and choreographer Stephen Galloway.

Go behind the scenes of a new collaboration between Boston Ballet and MIT.

What happens when dance and technology intertwine? Find out in MIT’s Interactive Robotics Lab, where Boston Ballet dancers are helping take machine learning to a whole new level. This forward-thinking team is working to teach the art of improvisation to…robots. See how the art-science connection supports innovation by using everyday tools from dance to inform emerging technologies. 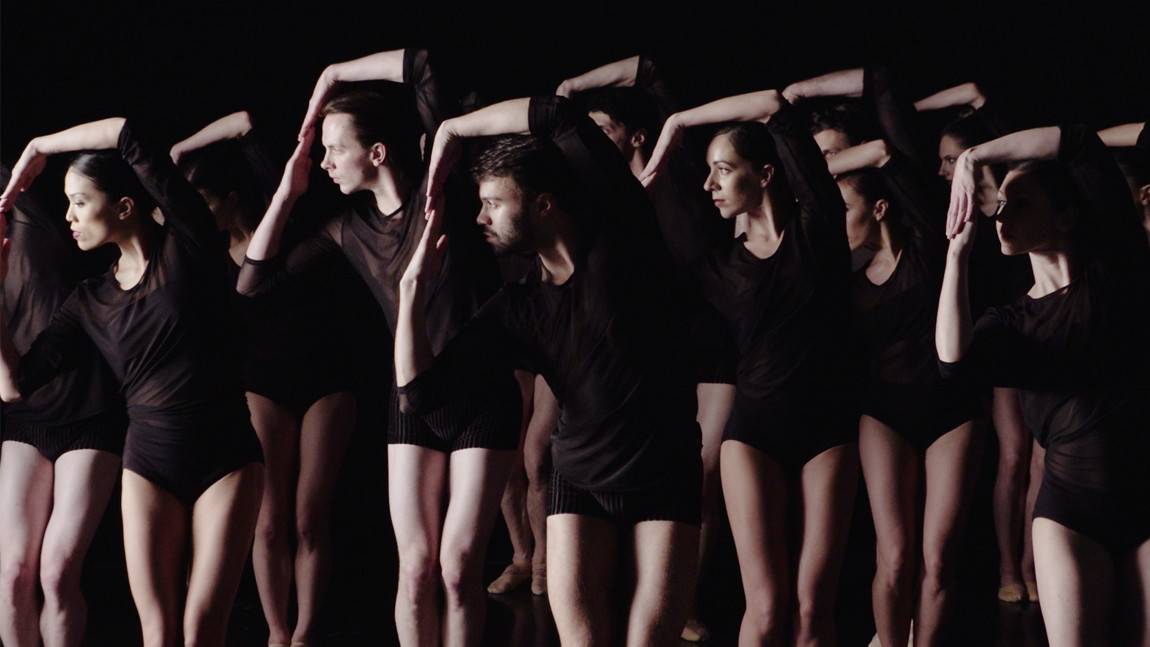 22 Boston Ballet dancers take a stand for the arts.

Principal Dancer John Lam created a new work that expresses 22 Boston Ballet dancers’ response to the proposed elimination of the National Endowment for the Arts. Watch now and find out what dance means to them. 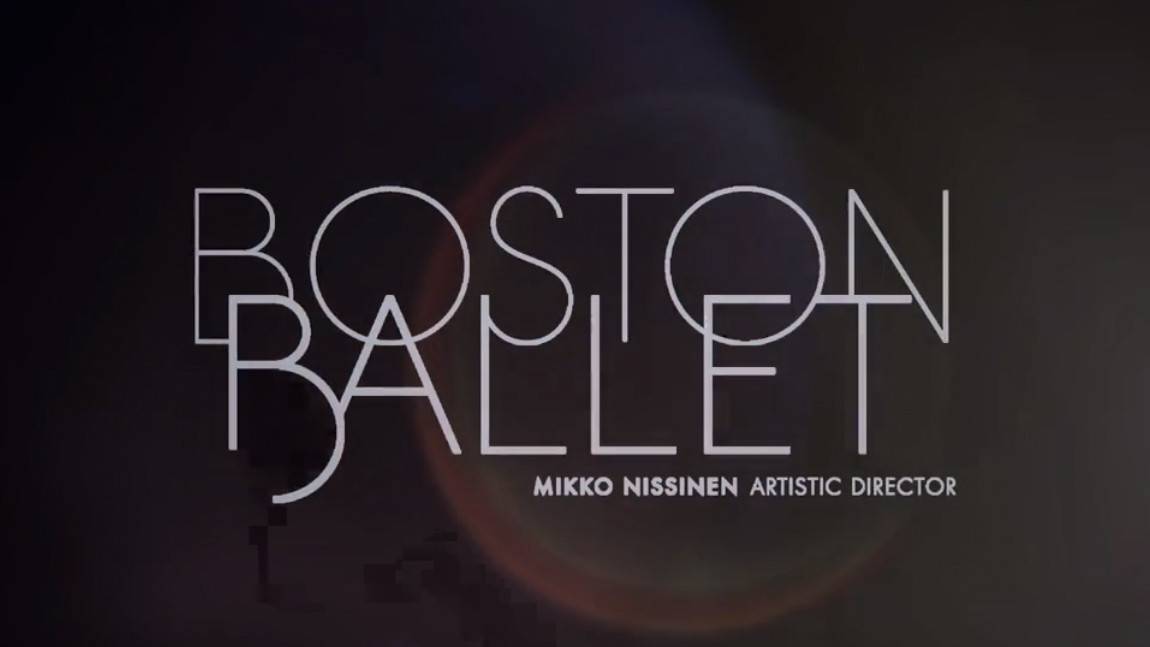 Experience the power of dance

See all that Boston Ballet has to offer; on  stage, in the studio, and in the community.

Experience the power of dance